Istanbul, Turkey's economy, trade, tourism center and world's is one of the leading metropolises. Istanbul consists of two sides separated by the Bosphorus, Asia and Europe.

Districts of the European Side

1: Arnavutköy – Arnavutköy is a large district in the north of Istanbul. It was named after the Albanians settled in the village. It is known that the road used in the campaigns organized to Europe during the Ottoman period passed through Arnavutköy. It is a very quiet and peaceful district and recently modern buildings and housing estates are being built.

2: Avcılar – Avcılar is a town on the west coast of the Marmara Sea. The district, which was once a small Greek village, quickly became industrialized after the Republic and became one of the largest districts of Istanbul today.

3: Bağcılar – Bağcılar is an industrial district located in the west of the city and has been developing rapidly in recent years. It is also continuing its evolution with different urban transformation projects.

4: Bahcelievler – Bahçelievler, is among the big districts of Istanbul and neighbour of other big districts, Bağcılar, Bakırköy and Güngören. Its history dates back to the Byzantine Empire and lies on the historical road between Edirne and Istanbul during the Ottoman period. The district, where the settlements are concentrated, is also close to the central industrial areas of the city.

5: Bakırköy – Bakırköy is one of the most important districts of the European side. There are also many shopping centers in the district, which is mostly filled with housing units and residential areas. The district has an important place in Ottoman history and there are many historical mansions from the Ottoman Empire.

6: Başakşehir – In 2008, leaving the district of Küçükçekmece Başakşehir is one of the youngest districts of Istanbul. The residential district has large public housing estates and shopping malls.

7: Bayrampasa – Bayrampasa is a district established by the Bulgarian immigrants in the early years of the Republic. It is located to the east of Eyup and to the west of Esenler-Güngören. In the district where artichokes and different agricultural products were produced, industrial zones were established and artichokes remained as a symbol of the district.

8: Besiktas – Besiktas is the oldest district of Istabul outside the city walls. The center of one of the major football teams of the country is a district where famous sights of the Bosphorus are located and you can see the history of Istanbul in every corner. It is a very touristic district with its entertainment venues, bars, cafes, hotels, bazaar and museums.

9: Beylikduzu – Dating back to the 2nd century BC, Beylikdüzü is a popular residential area in Istanbul. The district is located in the south west of Istanbul on the shores of the Sea of Marmara. There are modern housing estates and shopping centers in Beylikdüzü.

10: Beyoglu – Beyoglu, also known as Pera, which means the opposite collar, is one of the oldest districts of Istanbul. The district, which was inhabited by the Genoese during the Byzantine period, is today the symbolic tourism and entertainment district of Istanbul. In the district where there are many historical buildings, Istiklal Street, where shopping, dining and entertainment venues are busy, is located. It is located between two different historical districts such as Beşiktaş and Fatih.

11: Buyukcekmece – Büyükçekmece, which dates back to the Hellenes and contains many works from the Ottoman period, is located to the west of the city on the shore of the Marmara Sea. Adjacent to Beylikdüzü, the district is one of the award winning districts of Istanbul with its modern urbanism approach. Formerly Istanbul's summer town, Buyukcekmece is one of the most beautiful coastal districts of the city today.

12: Catalca – Although it is one of the largest districts in terms of area, it is a very calm and peaceful place. It has coast to the Marmara Sea and the Black Sea. Catalca is a popular weekend excursion place.

13: Esenler – Esenler is one of the largest settlements of the city and is adjacent to industrial districts such as Zeytinburnu and Bağcılar. There are many shopping centers and shops in the district dating back to the Byzantine period.

14: Esenyurt – Esenyurt is a young district which was separated from Büyükçekmece district in 2008. It is neighbour to Başakşehir, Avcılar and Beylikdüzü districts and is one of the important residential areas in the west of the city.

15: Eyup – Eyup, which was the first settlement established by Turks after the conquest of Istanbul, is a historical district. The district is located at the ends of the Golden Horn and there are many famous tourist spots, such as Pier Loti.

16: Fatih – The district where the historical peninsula is located has taken its name after the conquest of Istanbul. The most important touristic spots and historical places of the city are located in Fatih. Eminonu, one of the shopping and trade centers of the city for centuries, is located in this district. 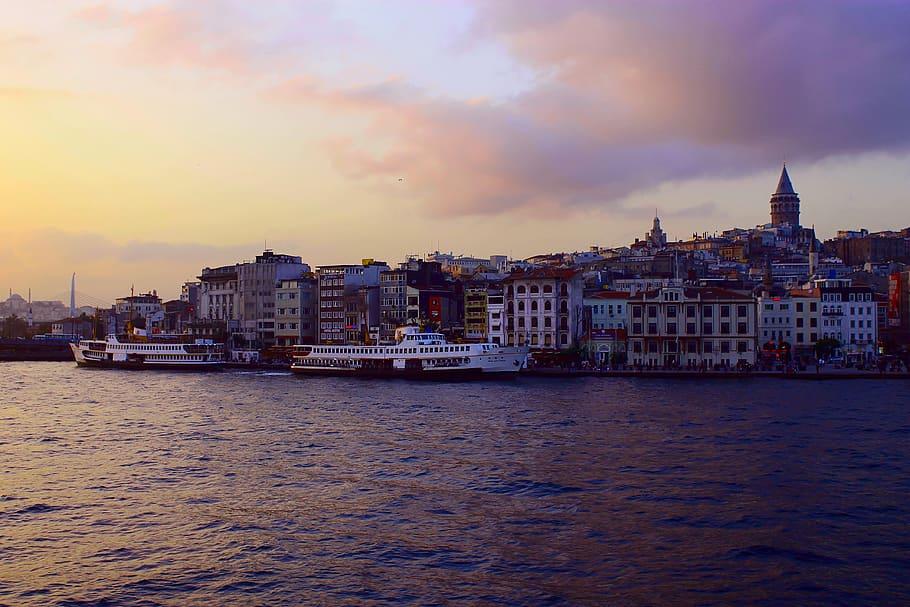 17: Gaziosmanpasa – Gaziosmanpasa is one of the districts of Istanbul which has rapidly migrated. The region, where mostly residential areas are located, has been developing with cultural activities and housing projects organized in recent years.

18: Güngören – Güngören is a residential area with a large conservative population. The district, which also includes shopping centers and shops, is adjacent to industrial districts.

19: Kağıthane – Kağıthane, which is located between the Golden Horn and the commercial and economic centers of the European side, is a district in the center of the city. There are many business centers, shopping centers and luxury restaurants in the district which is adjacent to Eyüp.

21: Sarıyer – Sarıyer is one of the most beautiful districts of the city with its coast to Istanbul Bosphorus and to the Black Sea. The district, where historical sites such as Rumeli Fortress and Emirgan Grove are located, is also the area where Belgrade Forest is located. In the center of the district there are beautiful fish restaurants and famous patisseries.

22: Silivri – Silivri is a town located on the western borders of the city and on the coast of the Marmara Sea. Although Buyukcekmece was a summer town, it was a rapidly developed settlement area in recent years.

23: Sultangazi – Sultangazi is a young district established in 2009. It is famous for its stone arches from the Ottoman Empire. The district consists mostly of residential areas.

24: Şişli – Şişli is a central district of Istanbul with the most important trade, economic and tourism spots. The district, where many historical buildings are located, is one of the most colorful districts of Istanbul where different ethnic groups live together. There are the central buildings of the country's most important banks, many skyscrapers, shopping centers and residences in the district.

25: Zeytinburnu – Located just outside the historical city walls, Zeytinburnu is the center of the city's textile manufacturing, trade and industry. Apart from industrial zones, the district is full of residential areas.

Districts of the Asian Side

26: Adalar (The Prince's Islands) – Adalar, which is inhabited by many Armenians and Greeks living in Istanbul, consists of nine islands, four of which are open to settlement. The district is the most popular summer place in the city, where there is a very peaceful life.

27: Ataşehir: – Ataşehir is a district that has been converted into a commercial and business center on the Asian side of the city. Ataşehir, where thousands of companies and large mass housing projects are located, has some of the biggest sports complexes and big shopping centers, too.

28: Beykoz – Beykoz is one of the most beautiful districts of the Asian side of the city with its coast to Istanbul Bosphorus and to the Black Sea. It is the only place where you can see the natural beauties of the region and the texture of Istanbul together where the mansions of the former rich people of Istanbul are located.

29: Çekmeköy – Çekmeköy is a district that has attracted a lot of interest with real estate sales recently. It is rapidly developing due to its proximity to Şile and Beykoz, one of the most beautiful holiday districts of the Asian side, and Ümraniye, which has become the business center of the Asian side in recent years.

30: Kadıköy – Kadıköy is the central district of the Asian side. Kadıköy, which is an important settlement on the Asian side from the Byzantine Empire to the Ottoman Empire and today, has many entertainment venues, bars, cafes and business centers. Like Haydarpasa Train Station, it is a district with the city's biggest railway station and many historical buildings.

31: Kartal – It is a district close to Pendik and Tuzla, the major industrial districts of the Asian side. Kartal is a preferred residential area with many modern public housing, shopping centers and hospitals.

32: Maltepe – Maltepe is located between Kadıköy and Kartal. With its developed urban structure, social areas, entertainment centers and shopping centers, it is another favorite residential area of the Asian side.

33: Pendik: – Pendik is the border district of Istanbul on the Asian continent. Sabiha Gokcen Airport, which is the second largest airport of Istanbul, was developed in the 1970s and is an important industrial area.

34: Sancaktepe: – Sancaktepe is a district that does not attract much interest as a settlement point in Istanbul. For this reason, it has a preserved nature to the present day. It is a region that Istanbulites prefer to relax in nature in the weekends..

35: Sultanbeyli – While Sultanbeyli was one of the agricultural areas of Istanbul at first, it became a district where workers were settled due to the developing industry since 1945. Today, it is a region where many conservative families live.

36: Şile – Şile is the most beautiful and most natural district in Anatolia located on the Black Sea coast of Istanbul. The beaches in the district, where there are usually summer houses, are places that many Istanbulites visit at weekends.

37: Tuzla – While Tuzla was a summer holiday town on the shores of the Sea of Marmara, it became one of the important industrial districts of the Asian side of Istanbul with the establishment of shipyards in 1980. Today, new residential areas and projects are being carried out in the district, which maintains its importance in terms of being an industrial zone.

38: Ümraniye – Ümraniye is an important business center district located in the center of Asian side of Istanbul, where transportation network, industry and construction projects have been carried out in recent years.

39: Üsküdar – Üsküdar is one of the oldest districts on the Asian side of Istanbul. There are songs about it, and was an important area in Ottoman times for many reasons. It is neighbour to Kadıköy and one of the most crowded districts of Asian side.