Istanbul is Turkey’s most populated city, as well as larger than some of the countries around the whole region. The country itself has more than 80 million people. At the same time, Istanbul alone is home to about %21 percent of that number with 16 million people! When we start thinking about the number of incoming tourists, both foreign and local, it is clear the city must invest in mega projects to accommodate the high-density population. As the real estate sector rises, especially in the last decade, a handful of attractions have sprouted up in and around Istanbul. The High-Speed Railway Project between Istanbul and Ankara, the country’s capital, that cuts the 500 km travel time in half is now operational. It had a cost of $4 Billion USD and carried about 1.5 million people with a revenue rate of %108 in 2018 alone. Below are some of the other projects under construction or completed in Istanbul.

Istanbul Airport; While the city had two previous airports to serve the public, they were not enough to handle the rising population as well as the passengers who stop by the city during their connecting flights. Istanbul Airport, the region’s one of the largest airport is built on a 79.5 km^2 area, and finally began accepting flights in 2019. With a cost of 11 Billion USD, the project's goal is to welcome more than 150 million passengers, and be a bridge to 350 different destinations around the world.

Galataport; mainly designed as an investment in the Tourism sector, this project aims to be a must-stop location for global cruise lines. With its 122 thousand km^2 area, Galataport restores the surrounding buildings from the Ottoman era, while constructing new recreational areas and cultural facilities. While it is estimated to be a merely $1 Billion USD project, it aims to bring an extra 1,5 million tourists annually.

Canal Istanbul; In the planning stages since 2011, this 75 Billion TRY project’s goal is to ease the Bosphorus traffic, as well as constructing new attractions to the city. It will create an island between the Asian and European continents through a 45 km long canal that connects the Black Sea with the Marmara Sea. These two locations are an important trading route for shipping companies, as the Black Sea is on the coasts of countries such as Russia, Ukraine, Bulgaria, and Georgia on the North East. Whereas the Marmara Sea is the connecting sea between these countries and the rest of the world. 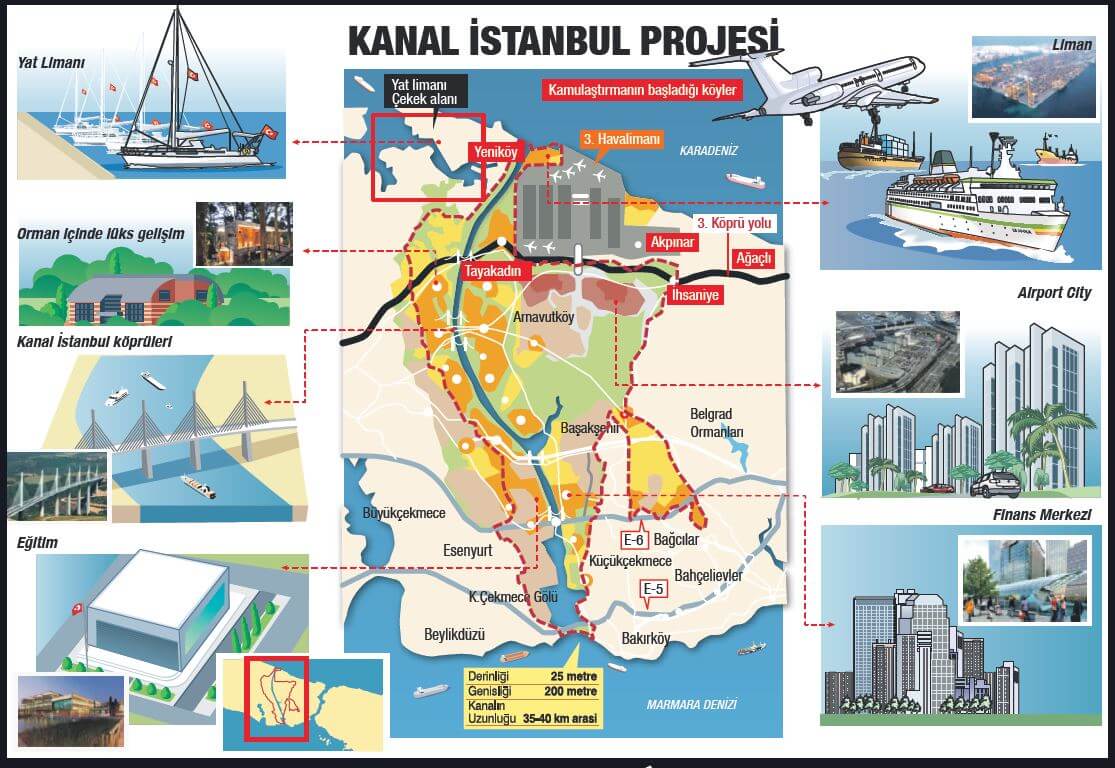 Above is a graphic designed by the Turkish Architectural Office, highlighting possibilities and plans on the canal. From Left up-down, to Right Up-Down; Yacht Port, Strengthening the Forest Infrastructure of the surrounding area, Investments for New Bridges, an Educational Faculty, Ports of various needs, an Airport City, and a Financial Center.

Urban Renewal Project; It is perhaps the highest costing investment the city has ever done. This mega project will completely investigate and repair every building in the city by 2023. It is estimated to cost $200 Billion USD while renewing 3.5 million buildings throughout the city in just 10 years.

Northern Marmara Highway; is a 421 km long project reaching the two sides of Istanbul with an estimated cost of 7 billion TRY. Most of the cost of this highway is used on the 3rd Bosphorus Bridge with 4,5 Billion TRY. The bridge is one of the longest projects in the world with a length of 2.1 km, width of 59 m, and a height of 322 m.

Eurasia Tunnel; holds the title for being the first intercontinental tunnel system in the world. With a cost of 1 Billion 248 Million USD and covering an area of 14,6 km, it is designed to ease traffic in the city. Eurasia Tunnel was planned side by side with the Marmaray railway system that passes through under Bosphorus. While the under the sea length is 5,4 km long, it is built as a two-level highway to accommodate the city’s traffic.

Marmaray; is a massively 76.5 km long railway system built to ease traffic throughout the city. It connects Istanbul’s coast from one end to the other and serves thousands of people every day, and reaching tens of millions every year. It had an approximate budget of 8 billion TRY, and earned a revenue of 1.4 Billion TRY in just six years.