Istanbul, for its specifically important location, has always been a central destination from every part of the world. Be it trade merchants moving globally, or people who are looking for a new home, Istanbul is the city to visit. With a population of more than 16 million, and an annual 12 million tourist rate, the city is home to a constantly changing culture while protecting its past. Istanbul’s own culture has sparked countless businesses that affected the global population.

As one of the largest cities in the world, Istanbul offers an intense diversity in food, travel, cultural activities, architecture, and many other subjects. Whether living on a budget or a substantial income, fulfilling needs and wants is easy in this city. There is a local shop in every neighborhood for every need. Butchers, hardware stores owned by a single family, kebab stores in every shape or size, clam dolma sellers who work on a wheeled table are some of the things you can find in every street. While clams are sold in a take-out format, there are other food sellers such as “chicken over rice” or “chickpea over rice” that carry a small chair and table everywhere they go.

From a historical standpoint, the importance and beauty of the Fatih district is perhaps immeasurable to anywhere else in Istanbul. The two mosques built on opposite sides, Hagia Sophia and the Grand Mosque, Topkapi Palace, as well as their museums, the Grand Bazaar, and Haliç the Golden Horn make any visitor spend a whole day in the district a daydream. Just visiting Hagia Sophia and the Grand Mosque alone should be a full day activity to explore and admire every inch of their architectural and scenic beauty. This 17 km2 district was once the capital of the Byzantine as well as the Ottoman Empires. The ruins leftover from them now supports a big portion of Istanbul's tourism sector.

Fatih district alone has such huge attractions that the Istanbul Municipality has always worked transportation to guide the masses to them. A streetcar, the T1 Tramway with a route length of 19.2 km, transports minimum 320.000 people every day. 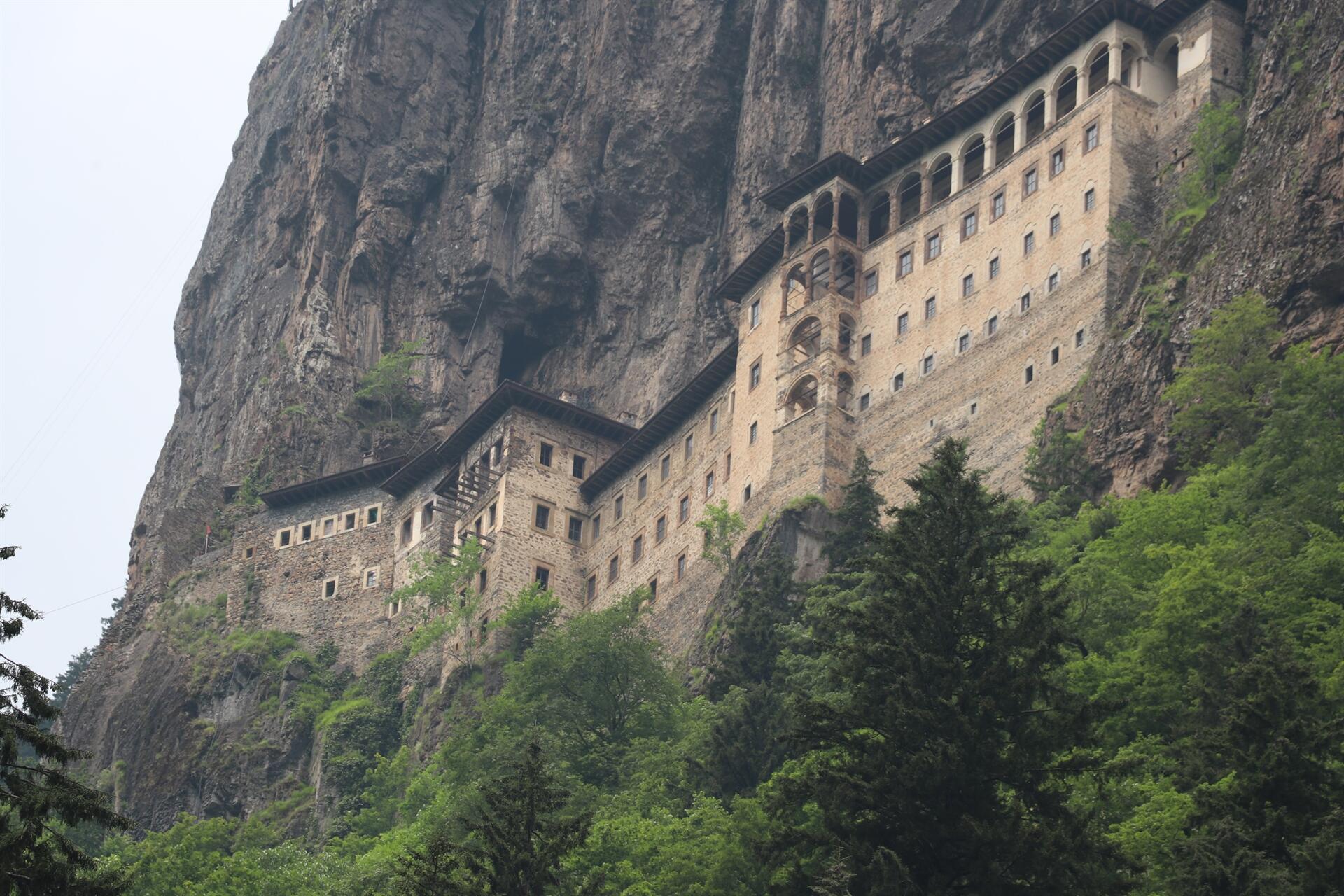 Sumela Monastery dates back to 368 AD and was built by two Athenian priests. It is a Greek Orthodox monastery dedicated to the Virgin Mary with the famous fresco depictions of the Virgin Mary and the Last Judgement found within. Sumela Monastery is known to be one of the oldest Christian monasteries in the world. Nowadays the monastery is mainly functioning as a site of tourist attraction.

Mount Nimrod or Nemrut has the most peculiar summit of all that is home to the tomb of an ancient king named King Antiochus I from the Kingdom of Commagene. There are several statues of gods from Apollo to Zeus found in the site to glorify the ancient King who claimed himself as equal to the gods. The huge heads of the statues have fallen and they are sitting on the ground right beside the bodies. 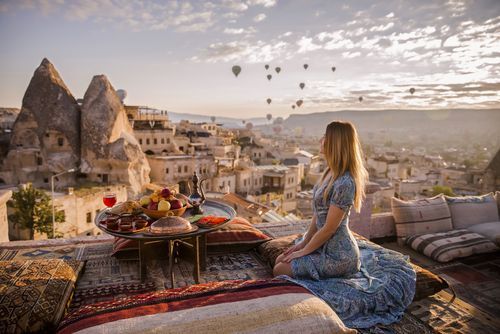 The area where Cappadocia is situated used to be an active volcanic area. Three mountains were volcanoes and the volcanic explosions were extremely strong in the area. The volcanic eruptions combined with harsh weather conditions shaped the land into what we know as Cappadocia today. These newly formed structures are referred to as fairy chimneys by the Turks as they look like they are part of a fairytale.

Uludag Mountain is also known as the Olympos Mountain in Greek mythology where the gods lived and it is 2,543 meters in height. Many monasteries and churches were built around the mountain during the Byzantine Empire era. Similarly, during the Ottoman Empire period, dervishes lived around the mountain. You can enjoy the beauty of Uludag Mountain by taking cable cars. It is the first and the longest cable car found in Turkey.

Being just a short flight or drive from Istanbul, Uludağ is the most popular resort in Turkey and attracts a large number of city dwellers from the Marmara region who enjoy short breaks in the snow. The destination became THE winter tourism center in Turkey. A mountain 63 km away from the district, Uludağ is an international spot for ski lovers and every other winter competition. With the height of 2.543 m and professional ski resorts, this mountain is the definitive choice of families during winter break.

The province's main ski center tracks are about 20km long, perfect for the casual winter activities. During the height of winter, snow can reach depths of up to 3m. With over twenty tracks available and an entertainment area, Uludağ has made a name for itself as the perfect all-inclusive ski holiday resort.

Çanakkale is located by the southern Marmara and north of the Aegean regions. The province carried two of the biggest operations that changed the world. The area is home to the original land of the city of Troy. You can still visit the same lands the Helen of Troy walked once, or Achilles and other Greek heroes invaded. The now-ruined city of Troy is magnificent and captivating for any traveler.

By the Eastern coasts of Çanakkale, the Gulf of Gallipoli lies. The gulf was the turning point of the Turkish Independence War against the ANZAC forces that served under the British Empire at the time of WWI. Now, the same land that is a grave for both sides, is home to a Monument to remember those who have fallen for their people.

Kuşadası is the most popular summer holiday destination in Turkey thanks to the large cruise lines that take tourists to the nearby ancient sites. Yet, it has many more bonuses up its sleeve when it comes to activities. The district takes its name from the Turkish word 'kuş' (bird) and 'ada' (island).

There are not many points in the world that has numerous ancient sites, remarkable natural attractions, top-tier outdoor activities, and gorgeous shores like the Aegean region. Kuşadası is located at the center of all these unique attractions and adds its spectacular scenery to the mix. Some of the popular attractions of its region like Izmir, Çeşme, Alaçatı, and Didim are closely located to the district. Greece's Samos island is just a boat ride away from the area.

Kuşadası is surrounded by many ruins left by ancient civilizations. There are several tours organized to visit them. You can pick any tour to spend a day to see the historical heritage around Belek. You would enjoy the nature of the area as well while you are walking around the ruins.

Izmir is a highly touristic location as well as a city full of villas for private space. You will experience a warm summer throughout the year, and the beaches most of the year. Now, Izmir has become one of the three biggest provinces of Turkey next to Istanbul and Ankara.

Nowadays, the beaches alone are enough to draw global attraction in the summer season. The villas here are an excellent opportunity for those who like to have peaceful and quiet days.

The Temple of Artemis, located in the ancient city of Ephesus in Izmir became an important landmark of the ancient world for the archeologists to draw the ancient timeline.

Temple of Apollo is the last stop on your tours to ancient ruins. Apollo is the god of sun, art, archery, and many other things in ancient Greek mythology. Its temple in Antalya is one of the most magnificent temples among the many around the Aegean sea and Mediterrane sea. 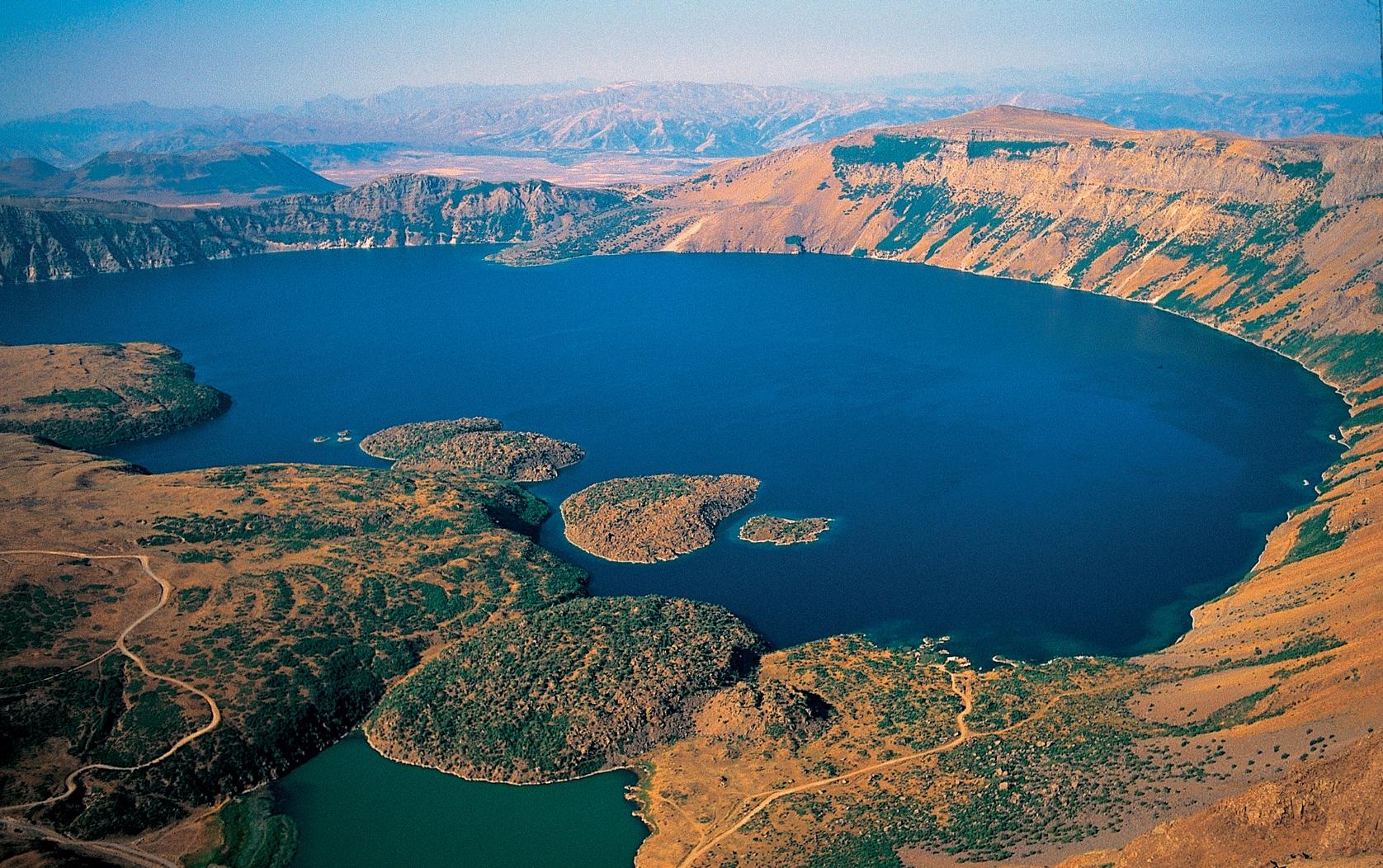 Lake Van is the largest among all the bodies of waters in Turkey that you may think of as the sea. Lake water is salty which is why there are not so many different species of fish that inhabits the Lake. Since the lake is formed through rainfalls, melted ice, and other rivers, the level changes from season to season. The water level is low during the winter months, however, it rises once the snow and ice melt in the summer. The lake even includes four small islands towards its southern section which are also archeological sites.

On the skirt of Mount Harsena, King Rock Tombs, that are formed out of limestone found on the grounds, are located. This ancient site dates back to the Kingdom of Pontus between 333 and 25 BC. The burial of the kings in a special place was an important issue in the Kingdom of Pontus. Thus, they buried their kings into the holes that they carved on these rocks. Also during the era of the Byzantine Empire, the site was used as a prison for the criminals.

Anıtkabir is located in Ankara and it is the mausoleum of Mustafa Kemal Atatürk, the founding father of the Republic of Turkey and the leader of the War of Independence who passed away on the 10th of November in 1938. Anıtkabir also includes Atatürk Museum which has Atatürk’s items, clothes as well as his medals on display. Many Turks visit Anıtkabir to pay their respect to the great leader on the 10th of November each year.